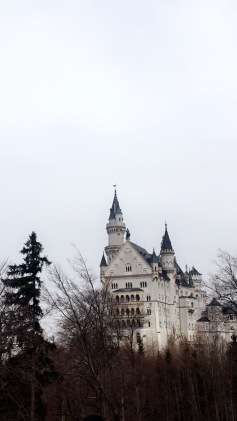 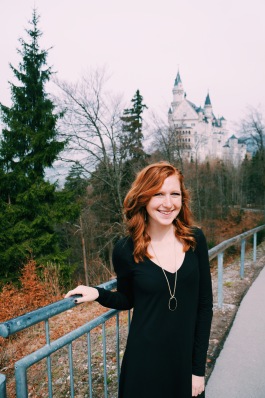 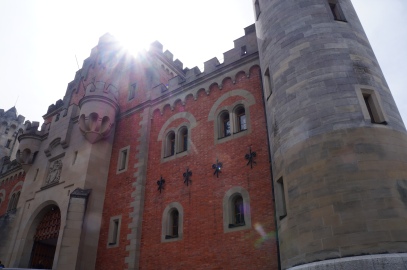 “They say if you dream something more than once, it’s sure to come true.”

Well, I woke up this morning, poured myself a mug of Twinning’s breakfast tea, turned on my Disney Princess playlist, and smiled to myself…because yesterday, I was a princess. When I think about the Neuschwanstein Castle and the quaint, little town that surrounds it, the only words that come to my mind are happily ever after.

If you’ve been following my European adventures, you know by now that I am obsessed with castles and obsessed with the idea that maybe I am the Little Mermaid or a ginger Belle.

I think every girl wants to be a princess when they grow up, and if I can be one sporadically throughout my life, well, then my heart is full.

I traveled to Füssen, Germany and then had a driver take me to the town surrounding the castle, and it was all very magical. When I saw the castle sitting up in between the snowy mountains, I could understand where Walt Disney got his inspiration to bring this castle into everyone’s lives through the tale of Sleeping Beauty.

I’ve seen a lot of mansions and castles in my time, but this was the most amazing, architecturally, aesthetically pleasing thing my eyes have ever seen.

I was supposed to see this castle months ago, but I am so glad I saw it when I did because there wasn’t any snow to trek through, the weather was flawless at a high of 63 degrees, and I got to prance around in a dress and get glammed up for my day as the Princess of Neuschwanstein.

While I was at the castle, this little girl ran up dressed in a Queen Elsa costume. This sweet princess even had a tiara on, I mean, a child after my own heart. I can only imagine that’s what I looked like as my mom toted me around America when I was younger.

I noticed the family was trying to get a group picture, so I asked them if they wanted me to take a picture for them. After I took the picture, I got to talking to them and found out they were a Navy family from Pensacola, FL…just down the road from where my family was stationed when we were in Jacksonville.

I looked at the little girl, and told her…

“Wanna know something cool? My sister works at Disney World.”

The sweet, precious child burst into tears and told me she couldn’t believe that I knew a real-life Disney princess!

Her mom looked at her and said…

“I think her sister is the real Queen Elsa, Don’t you think she looks like Princess Anna, sweetie?”

At this point the little girl lost it, she thought I was the real life Frozen character. I later had lunch with the family and the charade and magic continued.

The kingdom of Neuschwanstein created a magical moment for me, but also made me realize the magic that Walt Disney saw when he was there. For a moment, I got to be a princess and make a small child’s dream come true. Little did she know, she made the most magical day and memory for me.

“Happiness is a state of mind. It’s just according to the way you look at things.”

Cheers to the most magical moment, and maybe now that this happened, my Prince Charming is on his way to rescue me.

Join me next week as I show my momma my wonderful, European playground and we go to Paris, Berlin, and my hometown-stomping grounds of Wolfhagen, See you there and see you then.

Hannah was a guest of Neuschwanstein Castle. As always, my opinions are my own.