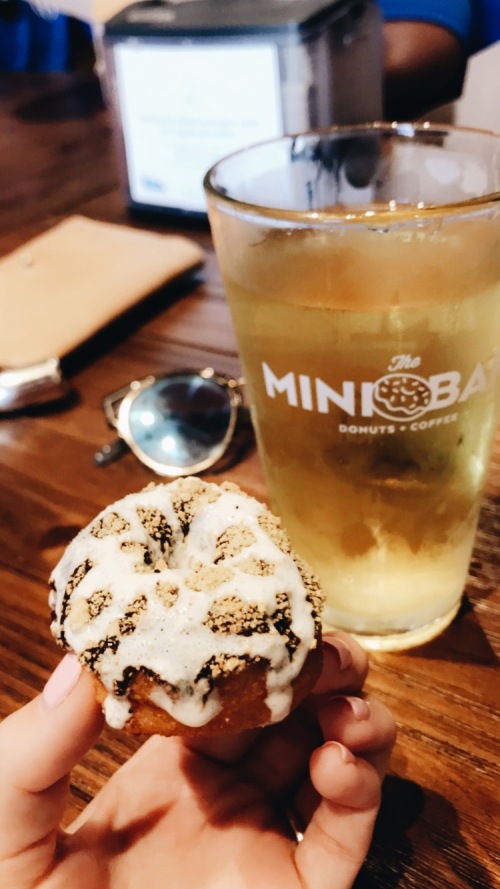 I’ll start this off with understanding this title is terrible. Haha. But, as I sat in my office on Monday and started writing this, I literally was chuckling (yes, chuckles) to myself. I thought, and still do think, that I am so clever.

But that’s not why you’re here. We’re all here for Jacksonville’s semi-new donut shop – The Mini-Bar. If you are like me and didn’t fully digest the title, it’s a mini donut shop. Meaning there are no standard size donuts, so prepare yourself.

However, I went with my friend Taylor, and he and I both decided as we were walking in that we were going to rate these donuts. And yes, I am a self-proclaimed donut aficionado.

Now, these donuts were awesome. Like drool-worthy. We tried 12 donuts, deciding on the s’mores, oreo, birthday cake & peanut butter cup. I didn’t try the peanut butter, but T said it was incredible…so good, he got three more.

The ratings were as follows: Taylor said the donut itself, without any additions, was the best donut he’s ever had. I thought they were fantastic, but if I’m being honest, I wish they had a standard size.

We also tried three of the beers on tap, and they were all awesome, although I will recommend the hard cider with your donut. It’s basically autumn in a combo, and everyone on my Snapchat responded to it. It clearly looks good and tastes good!

I haven’t been to Jax in a while and going up for the afternoon made me so want to do a weekend trip and really enjoy the beach and all the other food finds (including more donuts).