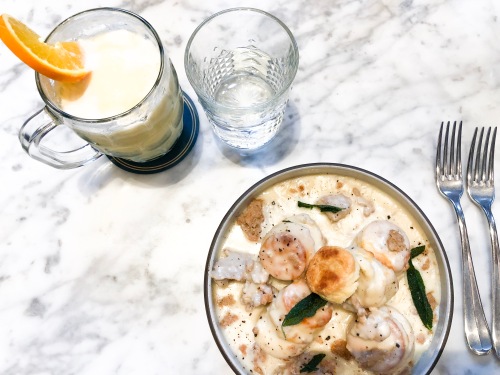 At first I thought that love was in the air when I walked into The Jones Assembly but then I realized that I was smelling scones and sausage and coffee combined!

I have been hearing all about The Jones Assembly since I first stepped foot in this city…and…it wasn’t my favorite. BUT!! That doesn’t mean it wasn’t phenomenal, it just won’t be my spot.

I was so intrigued when I first sat down with the brunch beverage menu – I settled for a Fromosa which is basically a mimosa with sherbet in it. It was wild & delicious but it definitely made me miss a regular mimosa.

I had such a hankering for biscuits and gravy & was thrilled to see they had it on the menu! It was delicious and so hearty that I had to take the rest of the plate home for an afternoon snack.

I won’t discredit that it was delicious, but it just wasn’t me! However, if you’re looking for some Portland vibes and intriguing concoctions that make you drool when reading about them, then I say give it a shot!

Hannah was a guest of The Jones Assembly. As always, all opinions are my own.